It's time for another status update on the upcoming gPodder release: Version 4.0.0. Version 4 will (at least initially) be more aimed towards mobile devices and QML, for all other use cases, you can keep using (and contributing to) gPodder 3.

The bleeding edge development happens in the "cuatro" branch in the main gPodder Git repository. From there, code is merged to the "gpodder-core" repository, which only contains the core gPodder library. On top of the core library, there are user interfaces, the single one that we have right now is the QML UI Reference Implementation in the "gpodder-ui-qml" repository. Taking this one step further are then the device/OS-specific repositories for customizations and packaging. Right now, we have "gpodder-bb10" for packaging of gPodder on Blackberry 10 as well as "gpodder-sailfish" for gPodder on Sailfish OS. Both of these use "gpodder-core" and "gpodder-ui-qml" as submodules to import the code from there, but might customize or replace parts of the QML UI Reference Implementation with platform-specific controls (but the Reference Implementation itself is still fully self-contained and functional, and in fact, most of the OS-specific packaging right now reuse everything and don't customize UI elements - yet).

Of course, for all you keyboard cowboys out there, we still have the CLI ("gpo") available. This is actually in the "gpodder-core" repository and is used to test the core library.

The gPodder 4 QML UI is not at all complete yet, but basic subscribing, downloading and playback works already. Stay tuned!
Posted by thp at 2:57 PM 1 comment:

It's time for another release of gPodder, your favorite podcast client. This release brings some improvements and fixes that we've collected over the last few months. An upcoming release of gPodder 3 will contain iPod support that Joseph is currently working on. But for now, here are the highlights of gPodder 3.5.2:
As always, a detailed changelog is available at gpodder.org/changelog/3.5.2.

For packages in distributions, see the downloads page.

Thanks to all users who supported the gPodder project by providing bug reports, patches, documentation, feedback or donations / Flattrs.
Posted by thp at 7:43 PM 2 comments: 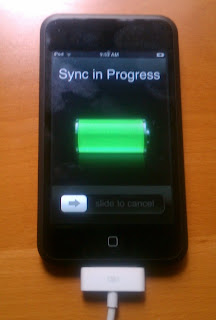 Progress report from the May 2013 hack day

We had another short hack day this weekend. This is the last official hack day, there won't be any future public hack days. What we did:
Development efforts are concentrated on gPodder 4 right now, which is a rewrite from scratch.
Posted by thp at 2:33 AM No comments:

As you might have figured out by now, some of the gPodder core developers meet up monthly at the Metalab in Vienna to discuss current developments and plans for the future. This also happened this month on the 13th of April.

What we have done:

The next hack day will be on May 11th, and we will definitely be discussing more about gPodder 4 by then.
Posted by thp at 8:11 PM No comments:

Want to support libmygpo-qt?
You can support the development of libmygpo-qt you can send me a book via my Amazon Wishlist or donate via paypal to stefan@derkits.at

What is libmygpo-qt?
libmygpo-qt is a Qt/C++ library wrapping the gpodder.net Webservice. It is currently used in Amarok & Clementine to retrieve a directory of podcasts & to synchronize podcast subscriptions with gpodder.net
Posted by Horrendus at 2:57 PM No comments:

gPodder 3.5.1 is a small bugfix release to fix some issues in the 3.5.0 release from last month. It is recommended for all users.
As always, a detailed changelog is available at gpodder.org/changelog/3.5.1.

For packages in distributions, see the downloads page.

Thanks to all users who supported the gPodder project by providing bug reports, patches, documentation, feedback or donations / Flattrs.
Posted by thp at 6:38 PM No comments:

After the 3.5.0 release last week, we also had our monthly Jour Fixe for gPodder hacking at the Metalab on Saturday. This is a summary of what happened:

Bernd worked on bug 1265 (Notification bubbles in Ubuntu), Stefan worked on the draft for the new gpodder.net API, and I worked on getting Windows and Ubuntu releases in shape. Also: Merging some pull requests and fixing the Gtk+ submenu activate issue, creating a workaround for the focus issue in the toolkit (see GNOME bug 695488), although it seems like we still have to tweak the workaround a bit.

The next hack day is planned for April 13th 2013 and will again take place at the Metalab Vienna. Until then - happy hacking, and see you in #gpodder on FreeNode IRC.
Posted by thp at 9:28 PM No comments:

gPodder 3.5.0 "The After Hours" released

It's time for another gPodder 3 release! Version 3.5.0 brings first-time support for Sailfish OS (using Sailfish Silica), an improved and cleaned-up MeeGo 1.2 Harmattan UI (which now shares big chunks of code with the Sailfish UI) and device playlist sync for MP3 players in the Desktop version.


As always, a detailed changelog is available at gpodder.org/changelog/3.5.0.


For packages in distributions, see the downloads page.

Thanks to all users who supported the gPodder project by providing bug reports, patches, documentation, feedback or donations / Flattrs.
Posted by thp at 5:32 PM No comments:

Our monthly Jour Fixe for gPodder hacking at the Metalab Vienna has taken place on the 16th this month.

We've been mostly working on fixing several bugs related to extension scripts on different platforms and we have been discussing the initial plans for gPodder 4. Right now, there's some code in the "cuatro" branch in Git that features a new, faster podcast feed parser. The extension fixes will be included in the next release.

Another catch-up release of mygpoclient is out, bringing you new features and an improved syncing experience. The top contributors of this release are Stefan Derkits with 12 commits, and Stefan Kögl with 5 commits. New features include:
It is recommended that all users upgrade to this new version of mygpoclient - it will become mandatory in a future gPodder release (or at least mandatory when gpodder.net syncing is used)

More information can be found on the mygpoclient homepage and in the cheeseshop.
Posted by thp at 1:02 PM No comments:

(This blog post comes from the Detlef team, who just finished their one-semester project at University to create a gpodder.net client for Android.) 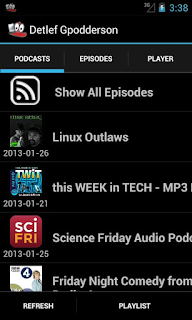 After almost 800 hours of work, attending hackdays, thousands of lines written (and thousand of lines deleted again) it's finally done: Version 1.0 of Detlef Gpodderson has been released on Google Play.

Excuse me, but who is Detlef?
Detlef is the code name of a gpodder.net client for Android 4+ devices. It was created by a team of 6 students during a university course on software engineering tutored by Stefan (@horrendus) and released under the terms of the GNU GPLv2 license.

800 hours of work may sound like a lot for such an app - but the course focused in large parts on project management, organisation and documentation. So the 800 hours did not go exclusively in coding as one might think.

The resulting software forms a good basis for further development, and contributions are very welcome!

Sounds nice, but what can I do with it?
Detlef Gpodderson is designed as a dedicated client for gpodder.net for devices running Android 4.0 or newer. Here's what you can do with this first release:
You want to contribute? Great!
Everybody can contribute to Detlef, and you don't even need to be able to write code to help us! Here are some ideas what you can do to help us out:
All that’s left to say is: Have fun with Detlef, and send us some feedback! If something does not work in this first version, please file a bug or even send a pull request - we are sure that we can iteratively improve the application to a point where it's the best podcatcher on Android.
Posted by thp at 10:21 AM 6 comments:

Several members of the gPodder Dev Team have attended FOSDEM 2013 last weekend in Brussels, Belgium. In addition to meeting with many developers and people from the community, we were also able to meet Eric (of gPodder-Mac OS X fame) and taste the wide selection of beers in Belgium.

It was also a great opportunity to try on the new gPodder T-Shirts (a very limited edition ;):

You can find more photos of the FOSDEM weekend in Brussels on Flickr.

The next physical meetup will be the Hack Day February 2013 in a bit more than one week. I hopefully get around to do some outstanding pull request merging until then. If you have a change and want to give it a little push, feel free to ping me (thp) directly.
Posted by thp at 2:30 PM 2 comments:

Another meetup in Vienna has been held this month to push forward some parts of gPodder (both the client, the web service as well as related projects such as the library and Detlef gPodderson).

There have been several topics that we discussed and worked on:

moe from the Detlet project (an open source gpodder.net podcatcher for Android) demonstrated their Android Podcatcher in the Android Emulator:

Thanks to all for attending, and see you at the February 2013 Hack Day!
Posted by thp at 8:57 PM No comments:

Flattr support has just been added to gpodder.net! Flattr is an easy way to support content creators by giving small amounts of money for content you enjoy. gpodder.net makes flattring podcasts even easier for listeners, publishers and client developers.

Listeners
When you connect your Flattr account in the gpodder.net Flattr settings, Flattr buttons will show up for all podcasts and episodes that accept donations through Flattr. You can also set up auto-flattring played episodes -- this will automatically flattr all episodes that you've listened to on a supported client (currently gPodder and Amarok). The directory contains a list of all podcasts that accept Flattr donations.

Client Developers
When your podcast client supports sending episode actions to gpodder.net it is now automatically Flattr-enabled! When a user enables auto-flattring on the website, all played episodes will automatically be flattred by gpodder.net.
You can also make use of the Settings API to let the user edit Flattr settings locally. The documentation contains a short summary of the Flattr support.

See also the announcement from Flattr.
Posted by Stefan Kögl at 7:45 PM No comments:

Builds of gPodder 3.4.0 for Windows are finally available after a short delay of a few days:

As always, please check the downloads page for up to date information on the most recent builds. For details on this release, see the official release announcement.
Posted by thp at 5:16 PM No comments: